History of our Firehouses

Shortly after the founding of the department, a recent acquisition of a fire truck brought up the need of a firehouse to store the truck. All the members volunteered their time to build a barn to keep it away from the elements. Some of the men, such as Ken, Earl McWithey, Fred Harke, Paul Marshall, Buck Shader, and Ed Melvin even worked through half of the night. In addition, the men worked every weekend. The building was soon completed in the fall of 1948, and the ‘new’ fire truck now had a home.

The picture below is of the original Station #1 located 150' northeast of the NY Route 31/Oswego Road intersection. The original building was involved in a fire in the 1980's and subsequently taken down. Presently, the location is an empty lot used as a parking lot for a neighboring business. The present-day Moyers Corners Station #1 is located across the street from this location. 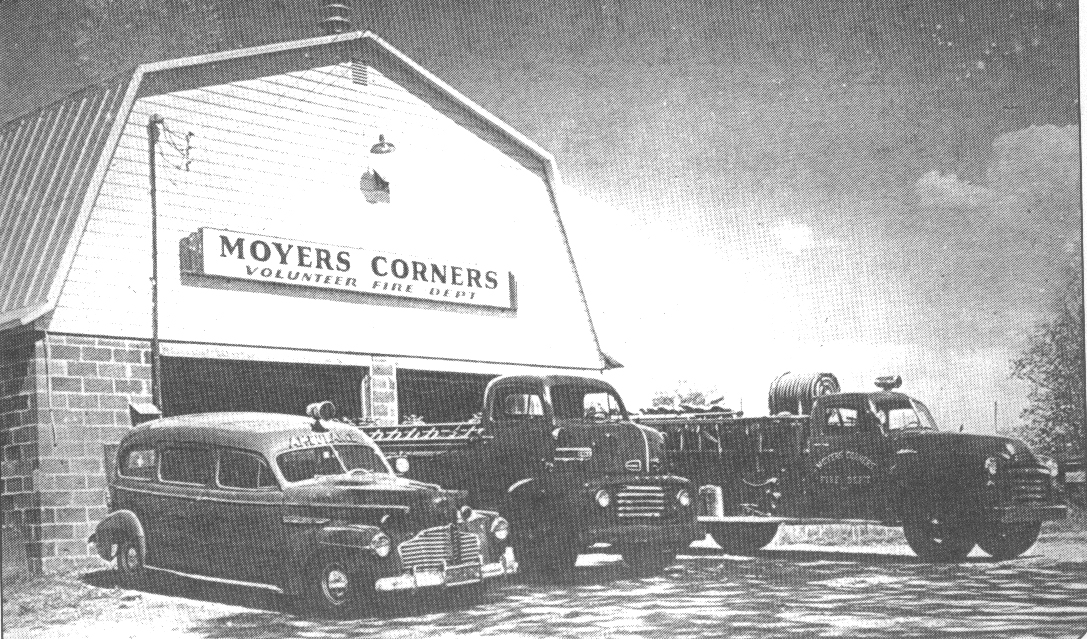 For nearly four years, until 1952, the department operated with the 1922 American LaFrance and an old acquired oil tanker that was converted into a water truck. This tanker was purchased by Tony Lewis. In 1952, Moyers Corners purchased their first new truck, a 1952 GMC pumper, a “Jimmy” engine with a 250 gpm pump and a 500 gallon tank. It manned two in the cab, and four on the tailboard.  1952 progressed into a landmark year for the department. In addition to the tanker and pumper, the Ladies Auxiliary purchased the department’s first ambulance at a cost of five hundred dollars. All three pieces of equipment proved to be useful by answering approximately twenty-five fire calls and thirty ambulance calls. Today, Station 1 houses Engine Company 11, Ladder Company 1, and Squad Company 1. When in service, Engine Company 12 responds from Station 1.

Later that same year, the GMC was moved to Melvin’s barn on Route 57. This barn later became Station Two, which was located at the corner of Route 57 and John Glen Boulevard (just south of where Wegman’s is today). The GMC was the first Station Two engine company, and it serviced the Station Two response area up until 1981. 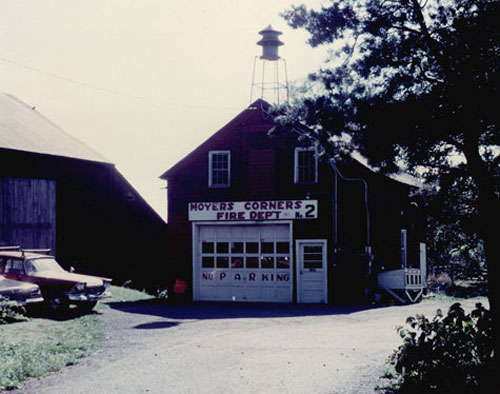 In 1962, the Department purchased a new engine, Engine 1. At the time, Onondaga County was starting a Fire Dispatch service, and Ken Brand was one of the first Fire Chiefs to have a new radio in his car. The GMC Engine at Station Two had a radio installed as well. The members could now be dispatched through Fire Control to their home receivers called Plectrons. This increased the response rate a great deal.

As additional growth occurred in the Station Two response area, and commercial development impacted the Oswego Road/Route 57 corridor, the need for a new fire station increased. In 1962, Station Two was relocated to a double bay station on Morgan Road, near the intersection of Buckley Road.  Station Two added a Haun Engine to its apparatus roster in 1963. TP-3 became a work horse for the station and saw extensive emergency and working fire responses over the years until retirement in 1969.

In 1967, the department purchased it’s first Rescue vehicle. For eighteen thousand dollars, the Moyers Corners Volunteer Fire Department purchased a 1967 Ford Saulsbury, financed with bingo game profits.  The first aerial truck was placed into service in Station Two in 1969. It consisted of a state of the art apparatus design and an American LaFrance 80 foot Snorkel articulating platform. This was designated as Truck 1.

Over the next few years, further station space needs resulted in the addition of a day recreation room, a kitchen and an office inside the station. The station eventually housed the GMC Jimmy Engine Company, the 1974 and 1977 Haun Engines, and the ALF Aerial Truck. As the run volume increased, and as Fire Station Two membership expanded, so did the need for a modern emergency response quarters.

In 1980, work was underway for the expansion of the station. The new expansion included the addition of three apparatus bays, renovation of the existing recreation room into an ambulance bay, a bunk room for overnight standbys, and construction of a full kitchen, a day room, conference room and office areas. 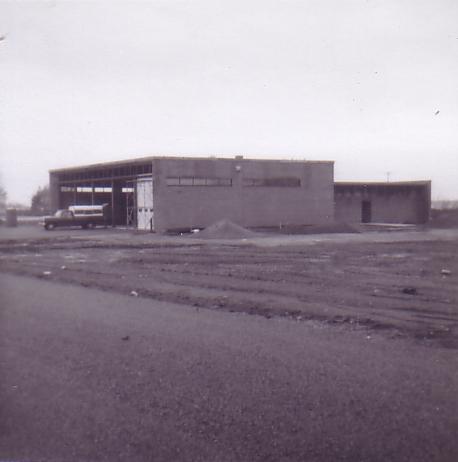 The tremendous growth and increase in alarm activities, and the need for timely response to the furthest southern area of the department’s district identified the need for an additional fire station. Forover thirty years, the department operated as a two station department; this changed with the construction and apparatus assignments to Fire Station Three.

Established in 1980 on Henry Clay Boulevard, between West Taft Road and the intersection of Vine Street, Station Three was constructed as a fully operational four bay fire station with a full compliment of facilities.

As the station was under construction in the late 1970’s, new personnel were recruited to man this fire station. These new firefighters reported to Station Two for an extended period of time prior to the completion of Station Three, in order to receive the appropriate training and gain operational experience. These personnel, as well as the existing Station Two personnel who lived in the newly established Station Three response area, would eventually compromise the station’s membership. 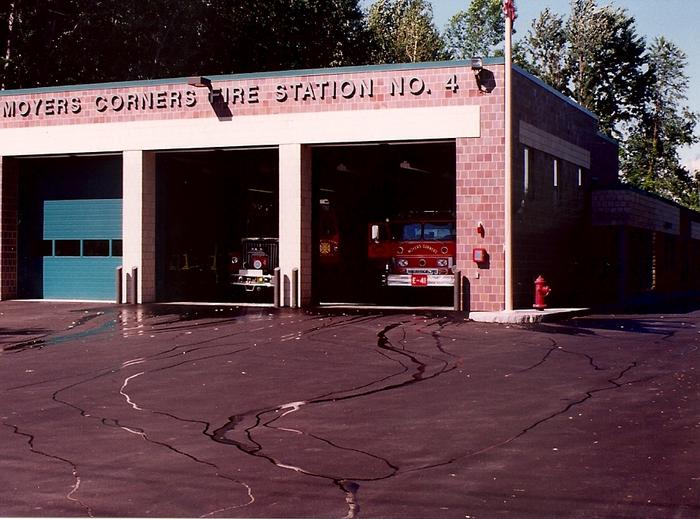 Fire Station Four was constructed in 1991 to meet the increasing demands associated with the growth and emergency responses in the northern and central response areas of the district that occurred throughout the 1980’s. Located on Oswego Road/Route 57 across from Seneca Mall, it has three apparatus bays, sleeping quarters, meeting and day rooms, and offices.

The fire station’s response first due district was a composite of areas formally covered by Station One and Station Two, with its first manning compliment comprised of personnel from both respective stations. Original Station Four personnel included twenty-four firefighters.

Moyers Corners owns land up near the northern end of our fire district, in anticipation of land development near Horseshoe Island. Presently, there are no facilites planned for this location in the near future.